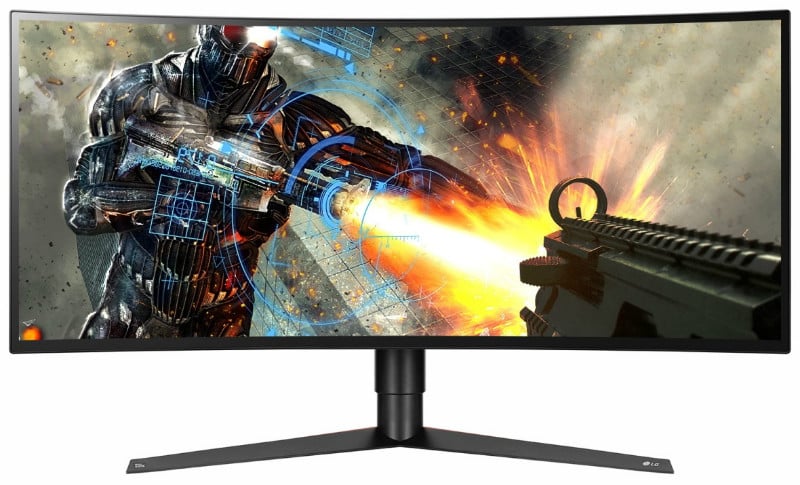 Updated: The LG 34GK950G features a 120Hz panel with the brand’s signature Nano IPS technology and Nvidia’s G-Sync for a smooth and vibrant performance. We’ve seen numerous new models, including a 144Hz QHD ultrawide from the same maker. The LG 34GK950G will attempt to edge out established competitors like the Acer X34P with its Nano IPS tech, but its performance numbers will decide its fate. 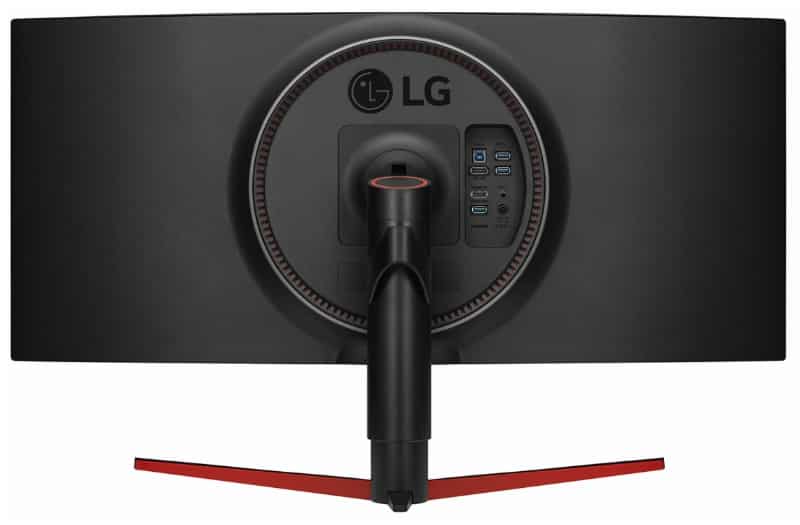 The 34GK950G closely resembles the 32GK850G when it comes to aesthetics save for the 21:9 aspect ratio which dictates the considerable width. This monitor will ship in full matte black with a few red accents on some of its parts. The face has a borderless design made possible through a dual-stage application composed of a thin outer layer and an even sleeker inner border.

The LG 34GK950G has a nice weight to it thanks to the outstanding build quality. The device stands stable on a desk, but there is a slight wobble if you try to adjust the screen when you change it. The craftsmanship for the device is well worth its price, as expected from LG’s premium display products.

One thing to consider is the proportions of the monitor which are sleek, yet able to dominate a standard desk. You have to consider that the ultrawide display will consume almost three feet, so placement is crucial to the monitor. You also have to deal with an external power supply which did not fit into the cabinet during the monitor’s design phase.

The most striking feature of the LG 34GK950G is its Sphere Lighting system that surrounds the attachment point of the stand. This decorative ring has embedded RGB LEDs which can be controlled via a hotkey or the OSD. We’ve seen this add-on on the 32GK850G and think that it’s a valuable addition to the system.

Setting it to a solid color adds a nice bias light to the screen which is sufficient to splash illumination on your desk. That makes seeing small objects easier, so you won’t have to fumble in the dark. You can set the Sphere Lighting LEDs to RGB so the LG 34GK950G can match the rest of your setup, but some find it too distracting for gaming sessions.

We like LG’s placement of the OSD JOG button at the middle of the bottom bezel for easy tweaking. However, the connectivity layout is somewhat limited thanks to the G-Sync module’s inherent restrictions. You only get DisplayPort 1.2, HDMI 1.4, and a couple of USB 3.0 ports for accessories.

The brand’s simplified design for stands is also applied in the LG 34GK950G. The penguin-feet base provides excellent stability, but it eats up a considerable width on any desk. However, its flexible enough with tilt, swivel, and height adjustments and is completely removable via a QD mechanism.

The LG 34GK950G sports a 34-inch Nano IPS panel with a 3440 x 1440 resolution, 120Hz refresh rate, and 5ms response time. The module is a 144Hz native variant, but the G-Sync module forces the monitor to run at 100Hz with a 20Hz overclock from the controller. This fact simply means that the monitor’s max refresh is 100% guaranteed without any issues, but it’s not recommended since it could damage the product.

LG is keen on pushing its Nano IPS technology for several models in its superb portfolio. Nano IPS is a name made for an IPS module that has an enhanced KSF phosphor layer for extra vibrancy. This tech allows the LG 34GK950G to achieve 98% DCI-P3 which equates to 135% in the sRGB gamut.

A colorimeter reveals that the LG 34GK950G’s Nano IPS technology can more or less reach its promised vibrancy. The screen achieves 132% sRGB easily, and the advantage is easily visible when compared to a standard IPS panel. The colors are richer and eye-popping thanks to the heavier saturation of shades born by the Nano IPS treatment from the brand.

However, accuracy is middling due to a DeltaE of 2.9 that is more or less consistent with the FreeSync variant. In practice, the differences are minimal for untrained eyes, but designers will look to improve this score. The screen is also too bright at default, so tweaking or calibration with a colorimeter is a must.

The screen’s Gamma is also slightly off at 2.1, but the more significant factor that will affect performance is the 900:1 contrast ratio. This score is acceptable for daily use, but we see more and more IPS panels that can exceed 1000:1 easily.

Calibration with a colorimeter like the DataColor Spyder Elite can improve the LG 34GK950G’s output drastically. You can clean up the color accuracy to a DE of .5 and a Gamma level of 2.2 which are excellent. There are no banding issues, to begin with, but correcting these errors will create a more balanced and lifelike screen.

Panel uniformity for the LG 34GK950G is decent enough for daily use. The majority of the quadrants stayed within 10% deviance except for the corners of the screen. The difference reached up to 20%, but in gaming situations, this should not affect how the screen looks.

The LG 34GK950G is equipped with a G-Sync module for smoother gaming, but it has its pros and cons. You get more fluid graphics and zero tearing with Nvidia’s technology activated, but it applies an underlying limitation to the product. This module uses the same Nano IPS panel as the LG 34GK950F, so it should be able to produce 144Hz natively.

But the LG 34GK950G is using the v.1 G-Sync module which doesn’t support refresh rates above 120Hz. The panel in this variant runs at 100Hz and is overclocked to 120Hz with the help of G-Sync.

We’re not sure why LG’s setup is this way, but we think it has something to do with the G-Sync v.2’s cost. It’s rumored to cost more or less $500, adding a hefty premium to models like the Asus PG27UQ and the Acer X27 which use it. Take note that these monitors are 4K 144Hz variants with HDR1000 capabilities, so the same does not apply to the LG 34GK950G.

There could be some technical limitations in using the v.2 module, or it simply isn’t practical. The LG 34GK950G isn’t a full HDR ultrawide monitor, and pushing it’s SRP beyond its main competitors will surely defeat its purpose and sellability. We don’t recommend pushing this model to 144Hz for extended periods, since it may damage the G-Sync unit or the monitor itself.

On a positive note, the LG 34GK950G is responsive and able to handle motion with aplomb. Setting the screen to 120Hz and the Overdrive setting in the OSD to its Fast level takes care of the minor blurring we noticed by default. It’s also fantastic that the monitor’s input lag only reaches 4ms which makes it suitable for E-Sports gaming.

The LG 34GK950G is a fantastic G-Sync ultrawide gaming monitor with a color performance that exceeds its competitors. The fidelity of the screen requires tweaking, but once applied; the product easily becomes the best in its segment. The display’s features and design are spot-on and well worth the premium price.

However, we’re disappointed that users cannot enjoy the LG 34GK950G at its full 144Hz output. A few technical and practical limitations may have caused this, but having smoother visuals is an acceptable trade-off. The added 24Hz is too little to consider, but it’s always nice to know that you are running at maximum performance.