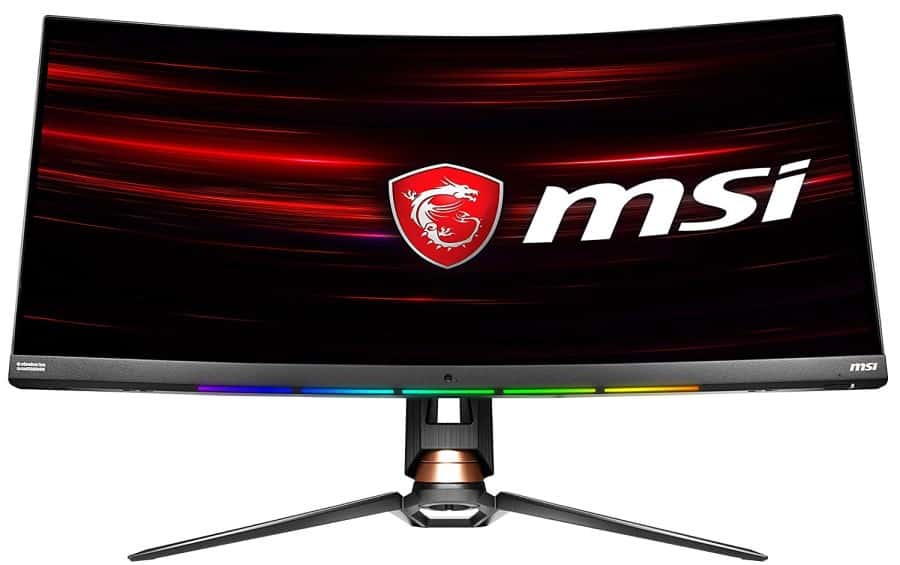 The MSI Optix MPG341CQR upgrades the stale ultrawide segment with a 144Hz 3440 x 1440 screen and multitude of valuable add-ons for cutting-edge convenience. This was conceptualized with gamers and streamers in mind, unlike the editing-oriented Prestige PS341WU. The MSI Optix MPG341CQR will arrive by summer of this year, so let’s check out if its preliminary specs make it the perfect option for you. 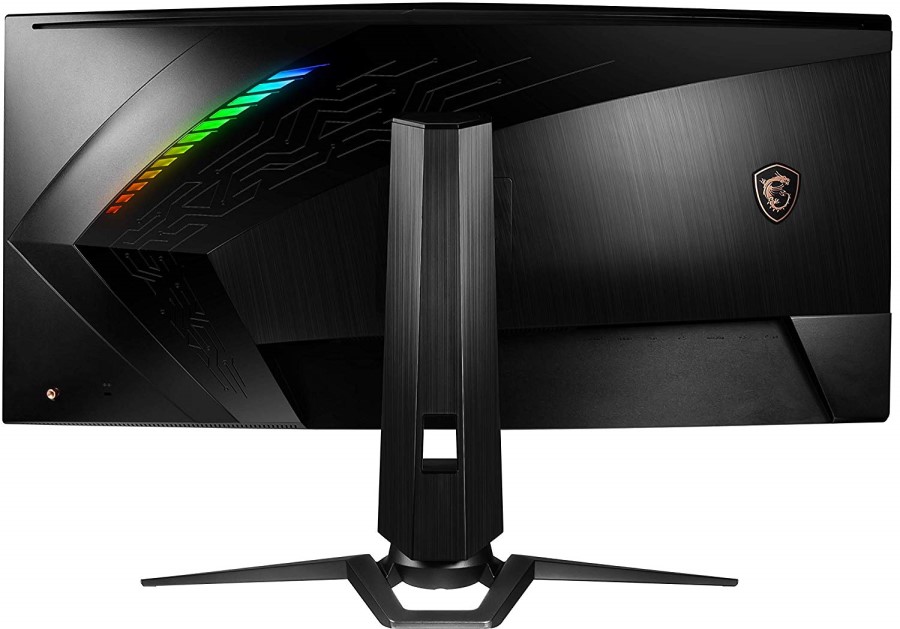 The MSI Optix MPG341CQR offers a unique package based on its functionalities along with a slightly redefined aesthetic. The monitor is easily one of the best looking displays at CES 2019 thanks to its sleek lines that are laced with RGB lighting. The display is bezel-free, but there appear to be some thin panel borders apparent on three sides. 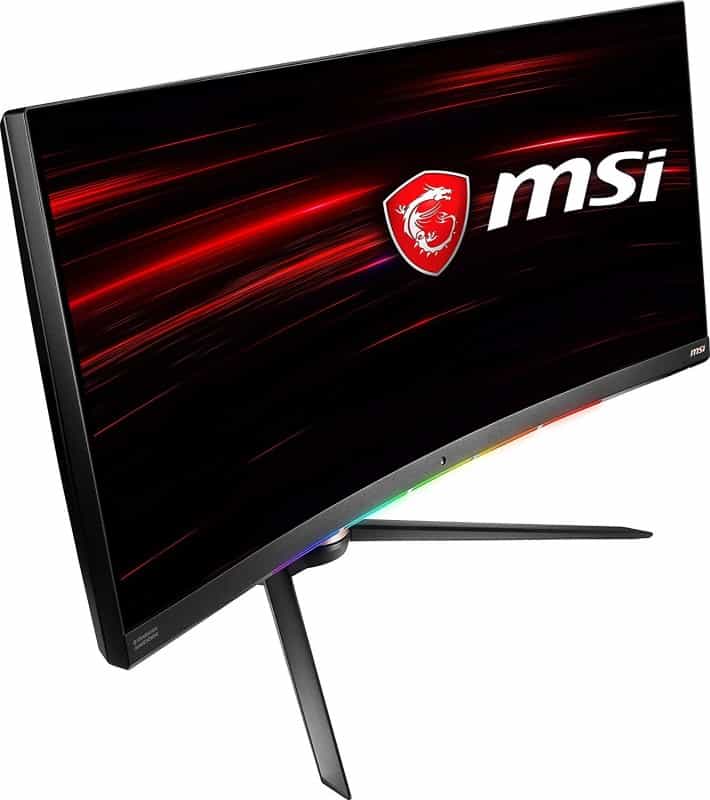 The MSI Optix MPG341CQR is the brand’s best monitor yet when it comes to build quality. It’s evident that the brand’s design and manufacturing process has drastically improved in this version compared to their first few offerings. There are no creaks or uneven seams, giving us the impression that MSI took extra care in producing this device.

The thicker bottom bezel has an array of LED strips which are compatible with Mystic Light, which is the brand’s own formula of lighting. Frankly, this implementation is more effective at making a build look sweet since its readily visible to the user. There is another array at the rear which adds even more RGB lighting, but it could also double as a bias light for eye safety.

The bottom lighting is the most interesting since it works with programs such as SteelSeries GameSense. This app works with games or comms platforms such as Discord so it can utilize the LEDs to indicate ammo count, alerts, and everything in between.

The MSI Optix MPG341CQR isn’t your typical ultrawide because it packs a few nifty features which modern gamers will find useful. The monitor has a built-in mouse bungee to lessen the mess brought about by cables on your desk. There is also a camera mount for streamer along with a built-in webcam at the bottom bezel for streamers.

The MSI Optix MPG341CQR is a massive monitor, so most wouldn’t expect a lot of flexibility from it. However, the beautifully designed stand offers tilt, swivel, and height adjustments so you can easily set the display the way you want it. VESA compatibility is part of the specification list, but frankly, it isn’t necessary with this device.

Connectivity is excellent on the MSI Optix MPG341CQR thanks to its modern ports. The video inputs include DisplayPort 1.4, dual HDMI 2.0 slots, and a USB-C connector for single cable operation. There is a total of four USB 3.1 slots on the device, with two of them located on the side in a hub.

There is also a panel for the I/O included which you can attach before you assemble the MSI Optix MPG341CQR. We like that MSI kept small details like this mind when they created their most premium monitor.

The MSI Optix MPG341CQR sports a 34-inch VA panel with a 3440 x 1440 resolution, a 144Hz native refresh rate, and a 4ms response time. 144Hz ultrawides such as the LG 34Gk950F are few and far in between, but manufacturer roadmaps say that there are more coming. The resolution and refresh rate combine competitive gaming performance and immersive capabilities in this model, and that’s quite rare for this model’s category.

Pixel density for monitors similar to the MSI Optix MPG341CQR’s size isn’t too big nor small. The level of detail is more than enough to be justified as an upgrade, but it isn’t as crazy as 4K when it comes to sharpness or GPU requirements. It’s also worth mentioning that devices like this model are great for multi-tasking, eliminating the need for dual-head setups which can be messy.

The MSI Optix MPG341CQR is a DisplayHDR 400-compliant monitor, but that label is more for marketing than true HDR performance. The VA screen’s color output amounts to 100% coverage for sRGB and around 78% for DCI-P3. That isn’t bad, especially since accuracy out of the box is more than decent at Delta E 2.25.

Gamers won’t have to calibrate the MSI Optix MPG341CQR, except maybe to tone down the brightness to around 40% or less. Doing so will give you a 2400:1 contrast ratio and a slightly better 2.15 gamma output. These make blacks deep and convincing, while color saturation looks well balanced for both gaming and everyday use.

One flaw we noticed on the MSI Optix MPG341CQR is its panel uniformity which suffered from uneven brightness. The top and bottom quadrants of the screen looked a bit grayish when viewing images, creating a variance of around 12%. Colors aren’t affected at a noticeable scale, but you will notice some washed-out shades in some instances if you look close enough.

Responsiveness is definitely stronger on the MSI Optix MPG341CQR compared to other VA-based monitors with lower refresh rates. Blurs don’t happen quite as often, but they still persist when movements are quick enough. You can use the Anti Motion Blur feature of the device, but it will lock a few vital features out such as Adaptive Sync.

The MSI Optix MPG341CQR is a FreeSync gaming monitor, but its also advertised to be compatible with Nvidia’s G-Sync. This model isn’t certified so there is no way to guarantee that there will be no issues when it’s used with an Nvidia GPU. Input lag sits at 10ms, making this model responsive enough for competitive play.

Thoughts on the MSI Optix MPG341CQR

The MSI Optix MPG341CQR is the brand’s best one yet, offering fantastic gaming performance via its upgraded refresh rate and wealth of extra features. We love the monitor’s design, but what struck us better is the improvements in quality and the gaming experience it offers. Some imaging specs did not reach the initial announcements, but the device doesn’t require calibration to get a well-balanced image.

The biggest flaw with the MSI Optix MPG341CQR is its panel uniformity which is prominent in larger screens. We’re not sure if its a unit to unit basis, or if the first batch of the model did suffer from lenient quality control measures. But beyond this complaint, we can say that the MSI Optix MPG341CQR is a must buy if you want a fast and immersive gaming monitor with an excellent design and array of extra features.

Search
NEW
POPULAR
You are here: Home / Reviews / MSI Optix MPG341CQR Review – 144Hz Ultrawide Gaming Monitor for Competitive and Immersive Gaming
This website uses cookies to improve your experience. We'll assume you're ok with this, but you can opt-out if you wish.Accept Read More
Privacy & Cookies Policy
Necessary Always Enabled
Share This